Can cars get anymore beautiful and luxurious than this? i mean just look at it!

This is the Mercedes Maybach 6 Cabriolet, part of the Vision of Mercedes. It features a 750bhp engine which can launch this luxury speedboat of the road from o-60 in less than 4 seconds. It’s fully electric which a coverage of 200 miles per charge. Even if the sprint was 6 seconds, i dont think many people would even be able to get past interior and its overall look. It just looks so elegant and exquisite and there’s only one word for the interior and that’s quintessential.

Ever seen anything like this? that blue lighting with those fiber optic type tubes in the front part of center console makes it look like a next generation spaceship.

There’s one thing that has been observed about the interior technology and that the COMAND system. Where is it? may be its built into the huge blue stripe somewhere, who knows. It must have some sort of infotainment system. Other than that, everything else just seem too much for the human eye. What a superb car.

It features fitted compartments for outing essentials such as suitcases which by the way is provided, in the front left half of the space under the bonnet.

Sadly, the Maybach 6 will not go into production but i guess its a pure statement by Mercedes to show what they’re capable of and to give us an idea of what is coming in the future. 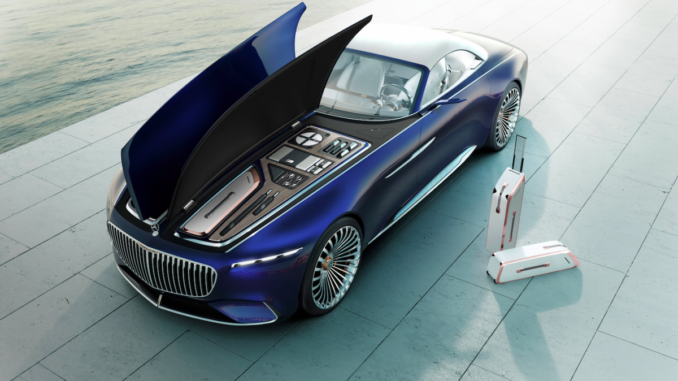